I recently got a whatsapp video saying that if your child doesn’t eat dirt and lives in a sterile and immunized environment (they meant USA) then the chances of he or she developing asthma are more and also that their immunity levels are very very low.

This has really got me thinking. I will complete my 6 months in USA now, I have not had pani puri and it is the best form of … immune building food I know and I just realized how much I miss it. I had it in India but I miss it here…terribly 😦

I love eating pani puri, pizza and vada pao in mumbai. I am constantly trying out new places. I remember this incident happened while I was shopping for my wedding and had a strong desire to eat Pani Puri. I was at mangaldas market and decided to take a pani puri break. 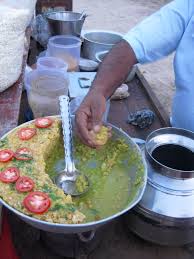 I found one opposite the market, about 5 mins towards Dadar. I enjoyed each gappa and was so thankful. I don’t like drinking the remaining water so I was about to throw it when the shopkeeper stopped me. He took my plate and drank the khatta meetha pani. I was stunned. He sensed my question and told me that I make it with a lot of effort and can’t see it all go to waste. I felt embarrassed.

6 months after marriage, I now know the effort that goes in cooking. Though this hasn’t been a life changing event but I admire his honesty towards his work. Going to mangaldas market in the evening is not really possible but if you are there, U can eat the delicious pani puri and be rest assured of the contents as you know it is made by someone who loves his work and is honest, diligent and passionate about it to say the least.

Thanks for coming on this page. Please leave me a smile if not a comment in words. View the about me page on the left to know more. Keep smiling :)

I am a graphologist. I analyse handwritings, signatures and drawings and help people understand themselves better and hire good people for their organization. Visit www.sos4graphology.com for more info.
Sunayna Navani